The Haas Historical Museum will receive a new roof paid for with money donated and raised by the society. What once was the Minerva Savings and Trust Co., the building at 128 N. Market St. houses some of the Minerva area’s history in the form of artifacts, old photographs and products manufactured by companies that at one time operated here.
“We have the funds,” said David Scharf, a member of the Minerva Area Historical Society board. “The contractor will do the work, weather permitting, this spring or summer. Through grants, fundraisers and donations we were able to get the funds.”
The local historical society was founded in 1967 and moved into this downtown building in 1980. A brother and sister, Arthur Haas and Odessa Haas, donated money to the historical society which the organization used to purchase the building.
“The Haas family was so very involved and very gracious to give the money to keep the historical society going,” Scharf said. “So why move? It is a historic building.”
The museum sits in the heart of downtown Minerva which retains some retail and service outlets.
The building dates back to the 1920s, according to Frederick Pisani, president the historical society.
“That is the original roof,” Pisani said. “It is starting to seep at the edges. It has been kind of patched here and there. You really can’t do anything inside unless your roof is good. You don’t want water to run in on your exhibits.”
Foundation and charity donated
One source of funding for the project was the Stark Community Foundation, which provided $11,000 to the Minerva Area Historical Society.
“It was one of the many grant requests the foundation received,” said Amy Krebs, director of grants and community initiative for the Stark Community Foundation. “One of the reasons the foundation supported the project is it will help preserve the memorabilia at the historical society. That is information that helps people learn about the history of the Minerva area.”
Another source of donations was the Minerva Community Charitable Fund, which provided $2,000.
And the Stark County commissioners contributed $2,083 from the Rover Pipeline Community Historic Preservation Fund.
“Our organization is for the benefit of the Minerva area,” said Pat Miller, chairwoman of the Minerva Community Charitable Fund. “They are very important to our village, having the historical society here. We were very happy to help out the historical society.”
Formed in 2004, the Minerva Community Charitable Fund is an affiliate of the Stark Community Foundation.
“We started the fund drive last summer,” Pisani said. “We got three grants. We did three fundraisers. The rest was donations. We had donations from people who used to live here.”
Within the Haas Historical Museum are photographs of elementary school children dating back to the 1880s and a huge bell from Union School, which is regarded as Minerva’s first school and operated from 1871 to 1938. There also is an old switchboard which came from the former GTE telephone company. And there is a framed newspaper front page of Sept. 10, 1936 from a publication known as The Minerva News.
Visitors also will see pottery and porcelain produced by Owen China and Cronin China, which operated in Minerva 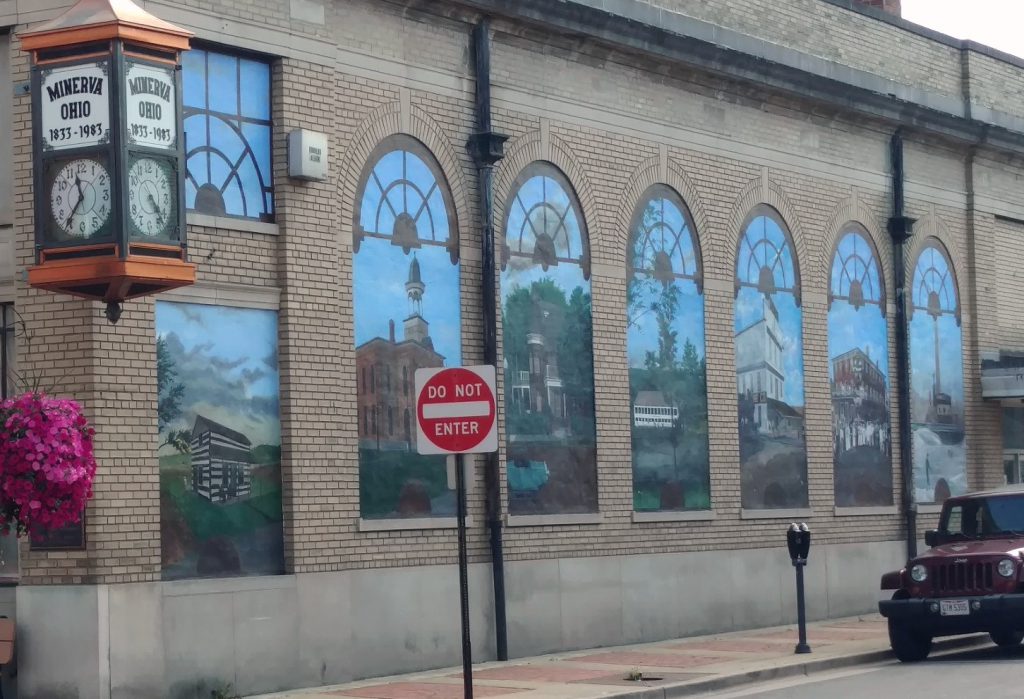