On Friday August 2 at 4:00 pm a banner mural and sculpture commemorating Red Grange will be unveiled on the Phoenix Rising Building at 624 Market Ave North in downtown Canton.  The artwork is part of The ELEVEN public art series.  The ELEVEN is a partnership between ArtsinStark and The Pro Football Hall of Fame to celebrate the greatest moments in professional football history.

The artist for Red Grange is Heather Bullach.  She is a portrait and landscape artist who works primarily in oils.  Her style ranges from tight realism to expressive impressionism. She earned her bachelor’s degree in art at Malone University in 2011 and resides in Canton, Ohio.  “Portraits are my first love,” says Bullach.  “I aim to catch a beauty that goes beyond the physical: to show the spirit of those I paint.”

The sponsors of Red Grange are: 1) The George H. Deuble Foundation, 2) The Hoover Foundation, 3) Stark Community Foundation, and 4) Timken Foundation of Canton.  Our In-kind Supporter is Hilscher-Clarke Electric who is generously providing all the lighting for all of The Eleven moments.  The ELEVEN is a public art project of ArtsinStark and The Pro Football Hall of Fame in Canton, Ohio celebrating the greatest moments in professional football history.

“Our goal for the eleven monumental pieces of public art is for them all to be within walking distance of one another in downtown Canton,” says ArtsinStark Board Chair Brian Zimmerman, “and we’re trying to have them all done by the end of 2020 —- the 100th anniversary of the NFL.”

This is the seventh moment of The ELEVEN to be unveiled.  Here is the entire list:

“A defining moment by the (now Chicago) Bears in 1925 was pivotal to the NFL as the league gained notoriety and, perhaps more importantly, respect.  Playing in the shadow of pro baseball and college football, the NFL received a huge boost when late that season Chicago signed Harold “Red” Grange, the nation’s most heralded college star, to a pro contract.  The Illinois halfback made his pro debut on Thanksgiving Day just five days after playing his final college game.  A capacity crowd of 36,000 fans filled Cubs Park in Chicago to see Grange and the Bears battle the crosstown rival Cardinals.   Ten days later 70,000 spectators packed the Polo Grounds in New York City to watch Grange’s Bears take on the hometown Giants.  The showing convinced Giants owner Tim Mara to continue to operate his club in the NFL’s largest market, rather than fold the team as he had considered doing.  After the season, Grange and the Bears embarked on a cross-country barnstorming tour.  Grange, pro football’s first big gate attraction, not only helped spread the game to tens of thousands of new fans, but his signing also provided much-needed credibility to the financial prospects of the sport.” 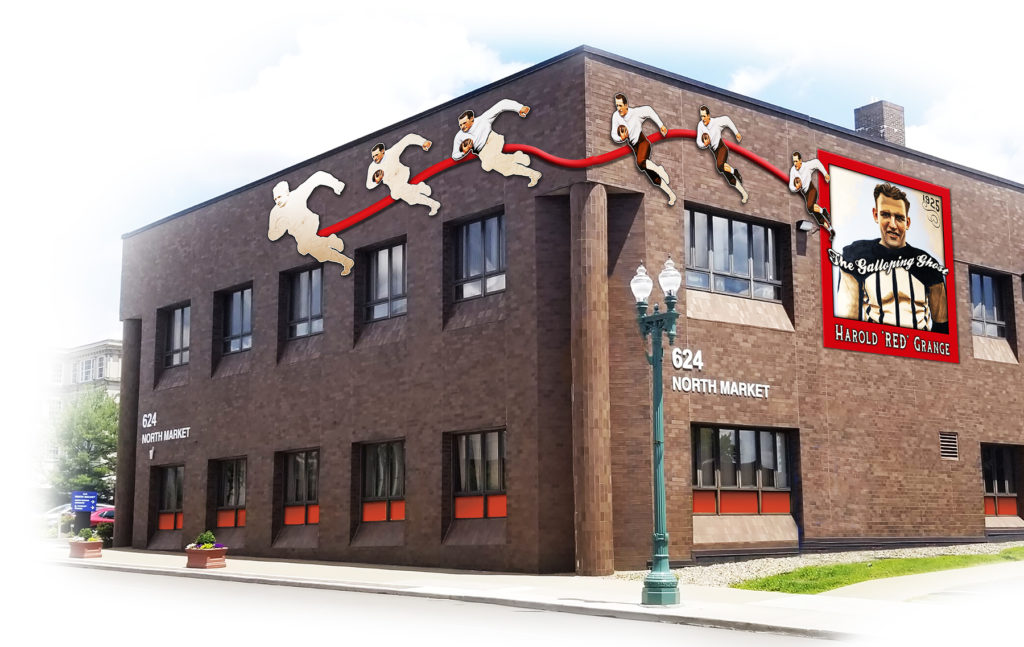