The McKinley Presidential Library & Museum has named Kimberly Kenney, formerly assistant director and curator, as its new Executive Director.  She replaces Joyce Yut, who has retired after 24 years in the position.
Kenney joined the staff at the McKinley Presidential Library & Museum as Curator in October 2001.  She was promoted to Assistant Director in April 2017, and has been training to take over as Executive Director since that time.
“I am very excited about this new opportunity to lead,” said Kenney.  “I am planning to build upon our history of success as we move forward as an organization.  We have a great team, and we are in a strategic position to grow.  Our museum is a treasure in Stark County, and we want to increase our visibility across northeast Ohio and beyond.  I am looking forward to a bright future.”
Kenney graduated summa cum laude from Wells College in Aurora, NY with a major in American history and minor in creative writing, where she became a member of Phi Beta Kappa. She earned her Master of Arts degree in History Museum Studies at the Cooperstown Graduate Program.  She graduated with the 31st Class of Leadership Stark County in 2018.
Since 2001, she has curated more than 40 exhibitions in the Keller Gallery, the museum’s temporary exhibition space, which she will continue to do in her new position.  “My favorite part of my job as Curator was planning, designing, and installing exhibitions,” said Kenney.  “I enjoy the process of sharing our amazing collection of artifacts, as well as hosting traveling exhibitions that I think will resonate with our visitors.  Our schedule is already planned through 2021, and includes some really interesting topics.  The next exhibition is Stark County Food:  From Early Farming to Modern Meals, which opens on June 13.  It is part of a larger initiative called Project EAT!, a county-wide celebration of all things food in Stark County.  Our partners include the Canton Museum of Art, Massillon Museum, National First Ladies Library, The Palace, StarkFresh, Carpe Diem, Walsh University, Kent State Stark, and many other organizations.  Other upcoming exhibitions will feature our vast collection of wedding dresses, an exploration of the 1970s, and a traveling exhibition from the Norman Rockwell Museum featuring Saturday Evening Post covers during World War II.  We will host that exhibit in 2020 as the nation celebrates the 75th anniversary of the end of the war.”
In 2014, Kenney led the Museum’s successful campaign to purchase Ida McKinley’s tiara from the History Channel show “Pawn Stars.”  “We raised $43,000 in three months from more than 400 donors in over 20 states,” she said.  She has also led the Museum’s effort to raise $69,440 for conservation treatment of 20 of Ida McKinley’s gowns.  So far the Museum has raised $37,890 to complete the work on 13 dresses.  Five have been completed, and two are currently being worked on.  “We have identified Ida’s dresses as the ‘crown jewel’ of our collection,” Kenney said.  “We are always working behind-the-scenes to find more funding to complete this project.”  So far the Museum has received grants from The History Fund (funded through a tax check-off on your Ohio state tax form), the Bay and Paul Foundations, the Gessner Family Foundation, the Willis Foundation, the Fox Foundation, the Conway Foundation, and the Wohlgemuth-Herschede Foundation. Two of the dresses were funded through a donation made by the Civil War re-enactors of the 14th Ohio Volunteer Infantry. A major retrospective of Ida McKinley’s life is planned in the Keller Gallery when all 20 dresses have been conserved.
Kenney is the author of six books: Canton: A Journey Through Time, Canton’s West Lawn Cemetery, Canton’s Pioneers in Flight, Canton Entertainment, Interpreting Anniversaries and Milestones at Museums and Historic Sites, and Through the Lens: The Photography of Frank Dick. A new book with co-author Barb Abbott of Canton Food Tours, Stark County Food: From Early Farming to Modern Meals, is scheduled for release in March 2019.  She is currently working on Murder and Mayhem in Stark County, which will be published in 2020.
Her work has also appeared in The Public Historian, the journal of the National Council for Public History; White House History, the journal of the White House Historical Association; The Repository; The Boston Globe; Aviation History; and the literary magazine Mused.
She has appeared on The Daily Show, First Ladies: Influence & Images, and Mysteries at the Museum.  Her program “The 1918 Influenza Pandemic” was featured on C-SPAN’s series American History TV.
She has served as the Region 5 representative for the National Digital Newspaper Project in Ohio, a field reviewer for the Museums for America grant program through the Institute for Museum and Library Services, and a grant reviewer for The History Fund.  She is an adjunct faculty member at the University of Mount Union and teaches online museum studies courses through the Northern States Conservation Center.
Kenney is a member of the MuseLab Advisory Council at Kent State University.
She was awarded the Oakley Certificate of Merit from The Association of Gravestone Studies for her interpretive projects at West Lawn Cemetery and the Jane Weston Chapman Award from the University of Mount Union for her dedication to women’s history programming. 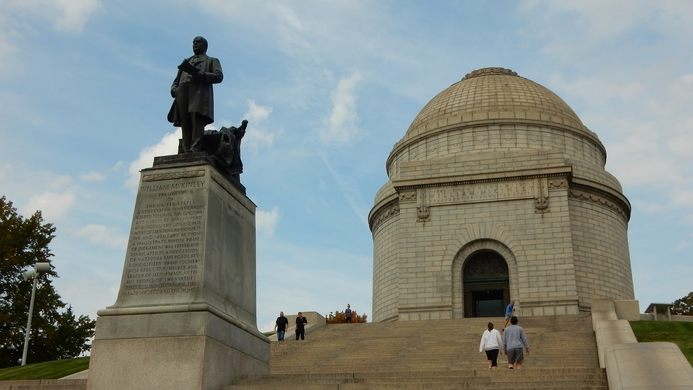