Friend of the CSO, Prof. MJ Albacete, shares some remarks leading up to Tchaikovsky & Price

Friend of the CSO, Prof. MJ Albacete, shares some remarks leading up to Tchaikovsky & Price

Long-time friend of the CSO, Prof. MJ Albacete, will be hosting a pre-concert lecture this Sunday before our performance of Tchaikovsky & Price featuring Michelle Cann at 6:00PM. Here is what he had to say leading up to the performance:

“Every Canton Symphony Orchestra concert is a unique experience in its own special way, and to enhance our Patron’s appreciation of each particular program, we often offer an informative pre-concert lecture an hour before the music begins. On October 30, our guest soloist at the keyboard will be Michelle Cann, who will perform not one—but two—very special items which will be totally new to our audience. I cannot wait to interview her before the performance. I am sure you will be enlightened and enriched by what she has to say . . .

Michelle Cann’s first selection will be the Piano Concerto in One Movement by Florence Beatrice Price, a talented pianist and composer of African-American heritage. Price rose to prominence in the 1930s with several classically styled symphonic works—three symphonies among them—and this brilliant piano concerto, penned and first performed in the mid-1930s. Classically trained at the New England Conservatory of Music in Boston, she became acquainted with the styles of the great European composers, as well as the prominent African-American composers of her generation: William Grant Still, William Dawson, James P. Johnson, and yes, “Duke” Ellington. A popular foreign celebrity in the United States at the time was British composer Samuel Coleridge-Taylor, also a composer of color, whose Cantata “Hiawatha’s Wedding Feast” was an overwhelming success when first performed at the Birmingham Festival in 1900.

Coleridge-Taylor once remarked that as a composer of color, he had to decide whether “to write music that sounded African, or to prove that he could write music that did not. . . ” and Price, in similar terms, would have agreed. So, her Piano concerto and a good number of her other solo piano pieces compare very favorably with the works of her European contemporaries, Czech composer Antonin Dvorak, the Russian Tchaikovsky, the French Debussy, and yes, the German, Richard Strauss. Embedded in many of her works, especially those of keyboard, we find suggestive fragments of spirituals, pre-Civil war tunes, and even a vibrant, fully original African style “Juba” dance.

But what connection does German composer Richard Strauss and his ‘Burleske for Piano and Orchestra’ have to do with all of this? For that, you’ll have to come to the pre-concert interview on Oct. 30, 6 pm, to learn what Michelle Cann has to say!”

For tickets, visit the link below to learn more. They start at $10, but children under 18 and students with a valid ID may attend at no cost.

P.S. – In addition, students from the Canton Youth Symphonies will perform in the lobby after the lecture and before the performance. 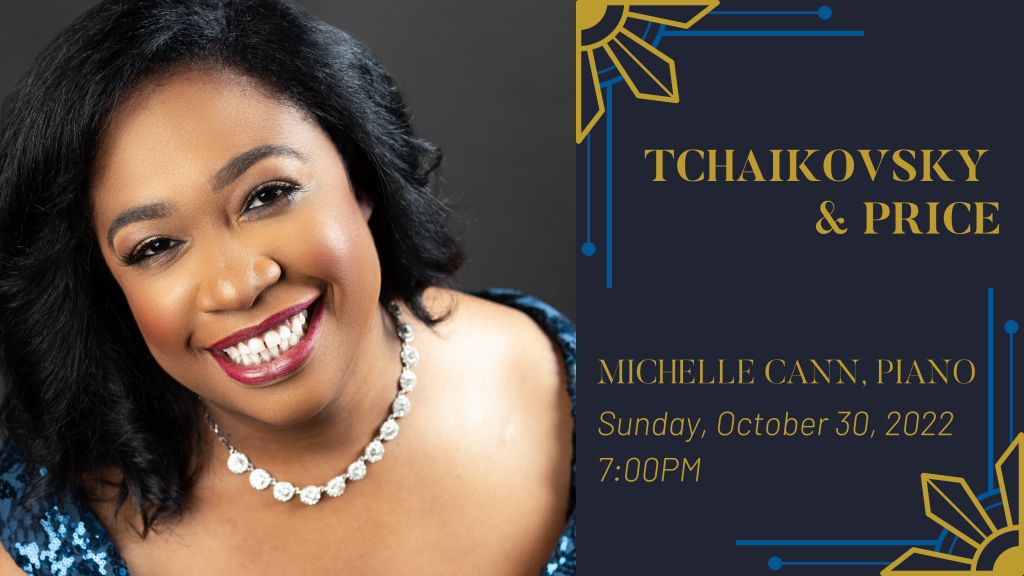