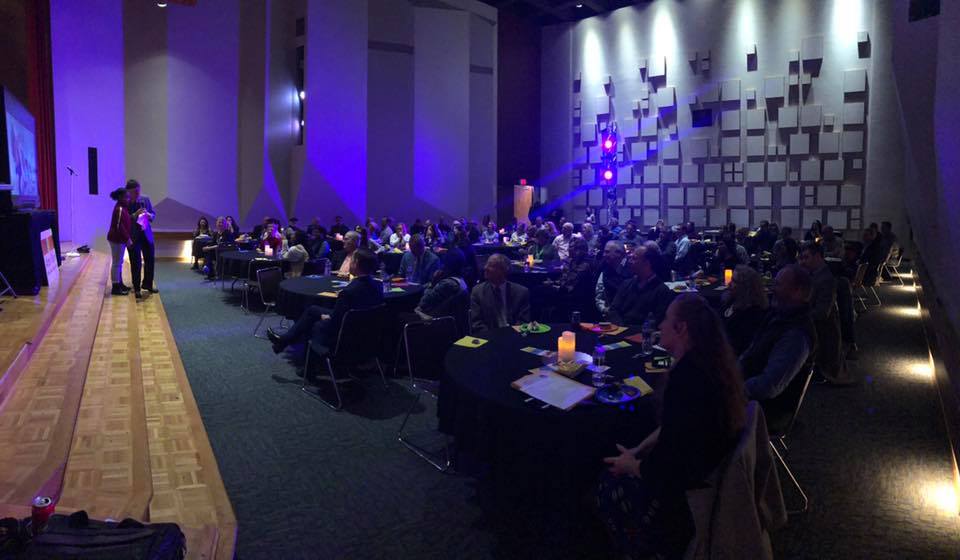 (Goal Is to Connect Every Kid in County to the Arts)
On Wednesday, March 6, ArtsinStark hosted its Annual Arts Campaign Kickoff Luncheon at the Cultural Center. “Our goal is to raise $1,660,000 million for all the arts in Canton/Stark County by May 15,” says Campaign Chair Paul Hiltz, President and CEO of Mercy Medical Center.  “I think we can do this because what the arts are doing here now is changing lives — one kid at a time.” Last year ArtsinStark, and the county’s seven major arts organizations: Canton Ballet, Players Guild, Canton Museum of Art, Massillon Museum, Canton Symphony, Palace Theatre, and Voices of Canton brought the arts to 67,000 kids. “That’s wonderful news,” says ArtsinStark Board Chair Brian Zimmerman,” but still means there are 15,000 kids we did not reach.”  The Kick Off included interviews with young artists Natalie Schmitt (Canton Ballet), Sullivan Diss (Avenue Arts) and Ayata Muhammed (Enrichment) as well as a performance by Rachel Crozier and Dallas Baldwin (Scenic Route).   Each donation to the Arts Campaign of $10 means five more kids get a free music class.  A donation of $1,000 puts an artist in classrooms for 250 kids.  More info at www.artsinstark.com/donate  or by calling 330-453-1075.
Roughly 74% of the $1.66 being raised goes right out the door to support organizations, big and small, who reach more than 150,000 kids and adults each year.  “The next 21% goes to maintain the Cultural Center, and put arts programs in our schools and in our downtown,” says ArtsinStark Vice Chair Janet Weir Creighton.  That includes the SmArts Program which operates in every one of the 17 public school systems in the County — and all of the Catholic elementary and middle schools.  That also includes the Genius Project which is in middle schools all across the region.  Then there’s First Fridays, the Canton Music Block, and projects in downtown Alliance, Jackson, Louisville, Massillon, Minerva, Hartville, North Canton, Canal Fulton, and more.  “The final 5% goes to marketing and fundraising,” says ArtsinStark CEO Robb Hankins, “which put another way means that 91 cents of every dollar raised goes right out the door to support programs.”
BACKGROUND: ArtsinStark uses the arts to create smarter kids, new jobs, and healthier communities.   We are a 49 year old private, non-profit organization that gives out grants, owns and manages the Cultural Center, and runs the Annual Arts Campaign — and much more (Canton Arts District, First Fridays, SmArts Program, the Genius Project, 20/20 Vision, the ELEVEN, and the Canton Music Block).  Our annual budget is $3 million.  What we don’t earn, we raise each spring through the Annual Arts Campaign.  In May 2018 we raised $1.66 million to become the only united arts fund drive in America to ever make goal for 13 years in a row. More at www.ArtsinStark.com.