To honor the NFL’s 100th anniversary, ArtsinStark unveiled two sculptures of The ELEVEN on the very same day: The Ice Bowl (1967) by North Carolina artist Brad Spencer made out of Belden Bricks — and The AFL (1959) by Philadelphia artist Katherine Stanek made out of concrete from Lindsay Precast.  “The ELEVEN is a project of ArtsinStark and The Pro Football Hall of Fame,” explains ArtsinStark Board Chair Brian Zimmerman. “We are creating a series of 11 monumental pieces of public art celebrating the greatest moments in professional football history — and we are only able to do it through the wonderful support of so many local donors and companies.” In the last four years ArtsinStark has installed seven murals and sculptures for The ELEVEN.  On Friday moments #8 and #9 were added to the list.  “This is the first time we’ve ever tried to unveil two on the same day,” says ArtsinStark CEO Robb Hankins.  By the end of 2021 ArtinStark will have all 11 moments completed as a new way to explore downtown from City Hall to the Cultural Center.  Friday afternoon a Dixieland jazz band led the crowd of roughly 100 socially distanced people between two sites on the grounds of the Canton Cultural Center (1001 Market Avenue North).  Before each unveiling, Pro-Football Hall of Fame CEO David Baker gave a short history lesson, and each of the artists explained the concept behind their individual pieces.

The two artworks could not be more different.  They are part of the goal of The ELEVEN which is to represent every kind of art currently being made in America.

The AFL (1959) is a concrete sculpture by Katherine Stanek and is located in a new mini park next to ArtsinStark’s administrative offices (900 Cleveland Avenue NW).  It celebrates the historic formation of the American Football League in 1959, which ran for ten seasons expanding into new markets and bringing tremendous innovation to the game — especially through the use of television.  The artist created eight huge heads, each five feet tall, sitting on top of 70 concrete television sets stacked in a circle.  The heads honor the eight men, led by Lamar Hunt, who had the courage to try and compete against the NFL.  Visitors can walk inside the circle and look up at the eight heads which have been made to resemble ancient warriors one might see at the site of Roman ruins.  Lindsay Precast in Canal Fulton produced all the concrete TV sets from rubber molds that Stanek made of four different kinds of 1960 television sets that people would have been watching the AFL games on.  Katherine Stanek began her career in art in 2002 at The Pennsylvania Academy when she received a 4-year merit scholarship for her studies.  She has shown her work in numerous galleries, museums and sculpture gardens. Katherine is the recipient of the George and Helen Segal Foundation Grant and her work has been featured in The National Sculpture Society’s Sculpture Review.   “When I began work on The AFL sculpture last fall, I knew it was a daunting task to complete it for the NFL 100th Anniversary celebration this year, “says Stanek, “ but I had no idea how many obstacles the world would throw at us in 2020.  The fact that I stand here today beside a completed installation is a testament to what it means to be a part of real community.  Everyone I have encountered throughout the process has been kind, welcoming, and generous.”

The sponsors of The AFL are: The Deuble Foundation, The Hoover Foundation, Stark Community Foundation, and The Timken Foundation of Canton.   In-kind Supporters are: Barnhart Crane, Coon Restoration, Hilscher-Clarke Electric, Lindsay Precast, and RG Smith.

“The Ice Bowl” (1967) is a brick sculpture by Brad Spencer.  It is 15-feet-tall and sits right along Cleveland Avenue near the entrance to the Canton Ballet at the Cultural Center.  It dramatically captures the final touchdown of an historic game.  In frigid conditions on New Year’s Eve 1967 at Lambeau Field, Bart Starr and the Green Bay Packers beat the Dallas Cowboys 21 – 17.  What The Ice Bowl moment specifically celebrates — is the end of the incredible Vince Lombardi era with the Green Bay Packers.

Belden Brick provided all the clay bricks, had them shipped to North Carolina, where Brad and his wife carved them.  The Spencers personally drove the bricks back to Canton in a truck so that Belden Brick could fire them.  Beaver Excavating, not only laid all the foundation for the sculpture, but their team of masons built the sculpture from the ground up, brick by brick.  Brad Spencer is one of the very few artists in the world who creates free-standing, high-relief brick sculptures. He has a BFA in Painting and Drawing from UNCG and an MFA in Sculpture.  Spencer carves unfired clay bricks in his Reidsville studio in North Carolina, has them fired, and then goes to the site to work with masons to assemble the entire piece.  Spencer has worked in public spaces throughout the Southeast including Charlotte, Greenville, SC, and Asheville.  “It is an honor to be counted among The ELEVEN artists and to be depicting The Ice Bowl, a game I saw as a 9-year-old Packer fan,” says Spencer. “With brick as my medium, I require collaboration with the arts and construction communities, and Tammy and I appreciate the expert efforts of ArtsinStark, Belden Brick, and Beaver Excavating to bring this sculpture to life.”

The sponsors of The Ice Bowl are: The Deuble Foundation, The Hoover Foundation, Stark Community Foundation, and The Timken Foundation of Canton.   In-kind Supporters are: Beaver Excavating, Belden Brick, and Hilscher-Clarke Electric

The ELEVEN is a project of ArtsinStark and The Pro Football Hall of Fame to: 1) Turn downtown into an ongoing celebration of football, 2) Create a walkable series of 11 pieces of world-class art, and 3) Establish a new tourism attraction.  Here are the eleven greatest moments in chronological order as selected by The Pro Football Hall of Fame — with the nine completed as of this week indicated. 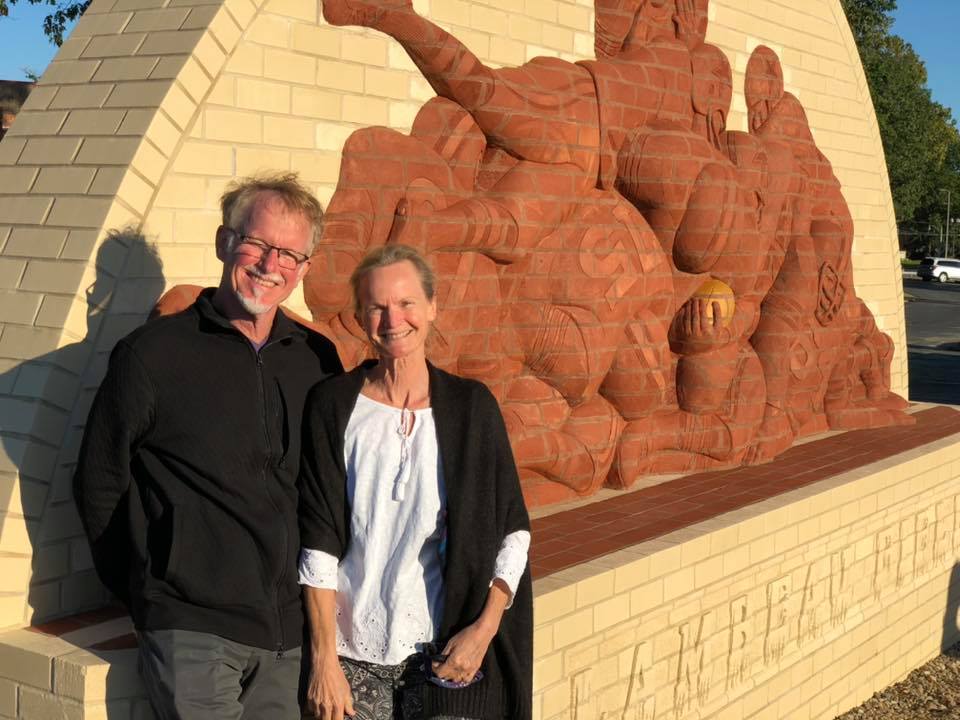