Join 90.7/91.3 The Summit FM — in conjunction with Visit Canton and New Belgium Brewing Company — on Saturday, March 30, 2019 at Umstattd Hall in Canton, OH for the fourth annual “330 Day Concert.” This is a free evening of acoustic music unlike any other, featuring 33 of Northeast Ohio’s finest musicians on one stage for one night only. The Summit will also be making an excitement announcement on-stage during the show.

The Umstattd Hall stage will be split in half for this event, offering two side-by-side performance spaces. While one group is performing, another will set up on the opposite side of the stage. The

stage lights will alternate back and forth as each act plays one acoustic song. The event is being produced by The Shootouts lead singer and Summit Marketing & Event Coordinator Ryan Humbert.

In 2015, the cities of Akron, Youngstown and Canton officially designated March 30th as “330 Day” on behalf of The Summit, and their local-music-only radio station, The330.net.

The event takes place one week after the end of The Summit’s Spring Membership Drive, which begins on-air from March 18th through the 22nd and raises funds for the continued operation of this non-profit, member-supported public radio station. The concert is a post-pledge drive celebration for the members and community that support the Summit.

Summit members will receive preferred seating for this event and can RSVP via an invitation-only event page.

Doors open at 6:00pm with music starting at 7:00pm. Admission is free with a $10 suggested donation and all ages are welcome. Umstattd Hall is located at 2331 17th St NW in Canton, OH, attached to McKinley High School (next to the Pro Football Hall of Fame) and is the home of the Canton Symphony Orchestra. 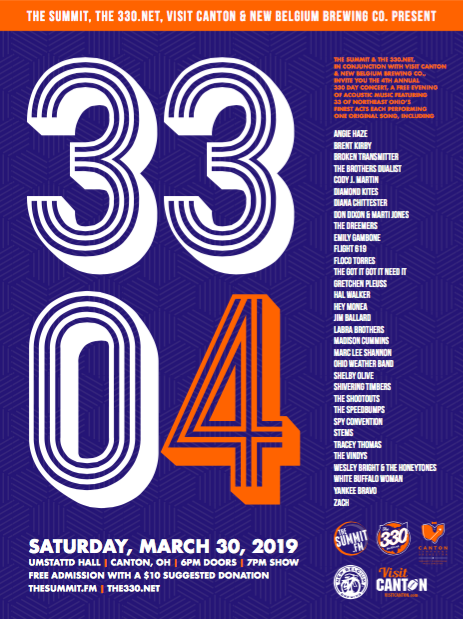